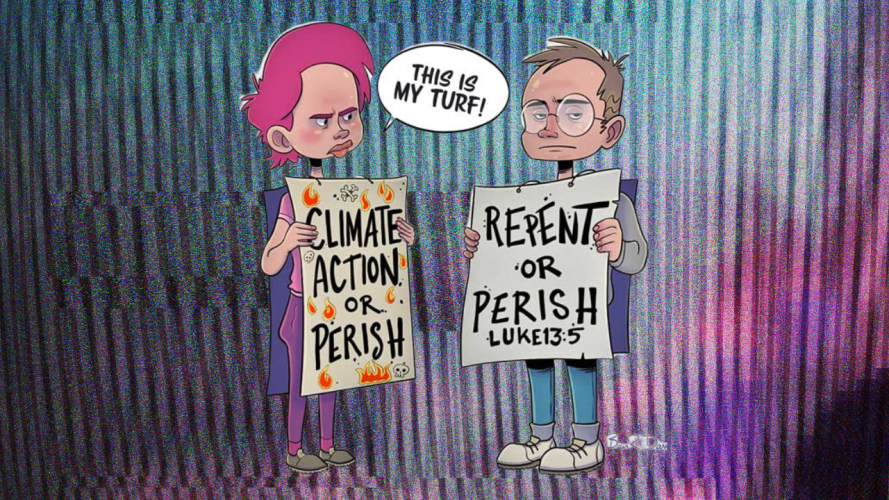 Littlefield: “I don’t think it is a coincidence that not long after the Church stopped regularly preaching judgement, the Church and society declined… People are primed for that message, and the Green movement moved in and took control of the platform that the Church vacated.”

People are inherently ‘millenarian’. That is, they inherently believe that our way of life is going to be brought to a rapid halt, in some form or another. They have an inherent belief, or instinct, that a massive change is coming, and one that will likely be a bad experience for most people.

This is because humans have an inbuilt expectation of judgement. They know on some level that they are going to face the King of kings. They know at the very least that they are going to give an account. It is also because historically civilisations have failed so much, so people have an inherent instinct that our own civilisation is fragile and could collapse. They also see how fragile and fallen humanity is, they experience this first-hand in themselves and others.

Environmentalism taps into this instinct and manipulates it. The constant failed prediction of end times tragedies by climate scientists and activists doesn’t harm the environmentalist message as much as we would normally think. Because people have this inherent instinct of the fragility of human society, they easily assuage themselves that we are just lucky it didn’t happen this time, but next time it could, so, we must make changes. And they wait in expectation of the next possible catastrophe.

Ironically, Bible preachers used to be this voice of judgement in the nations. They would warn of impending doom if people did not repent, constantly. But at some point, large portions of the church stopped doing that, and so people filled their vision with other voices that do it. Or at the very least, people were captured by other voices that do preach about impending doom for the unrepentant.

Green environmentalist end times propaganda carries all of the messaging of the gospel in a twisted form:

I don’t think it is a coincidence that not long after the Church stopped regularly preaching judgement, the Church and society declined. There may have been a lot of false predictors of end time dates. But there was also a lot of earnest warnings about the coming judgement if people do not repent. People are primed for that message, and the Green movement moved in and took control of the platform that the Church vacated.

Don’t be afraid to preach judgement. Don’t make false predictions. But warn people that if they do not repent they will be judged. The fact that they have been given over to a false gospel shows in some way our society is being judged already. But people can still escape the final judgement.

We need to preach this relentlessly, unapologetically and often to gain people’s ears. This is what previous generations of the Church did, and this is why pretty much every book of the Bible is packed with warnings about impending doom for the unrepentant.”

Also, you may like to read: “You Are Being Manipulated” https://caldronpool.com/you-are-being-manipulated/

How To Face Temptation as Jesus Did