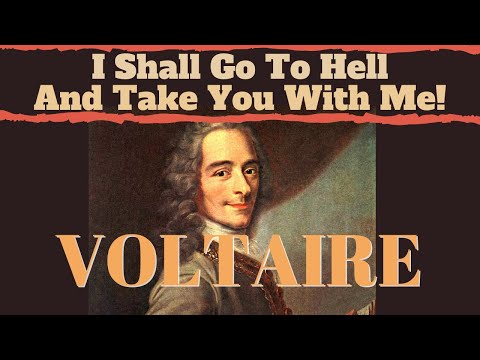 Famous Last Words: Voltaire “I shall go to Hell and take you with me!” (AoT QuickCLIP)

Please consider donating to support.
https://paypal.me/bradsward
Brad from Carolina/Armor of Truth is a full-time ministry.
Content will always be free.

During his life was quoted:
“In twenty years Christianity will be no more. My single hand shall destroy the edifice it took twelve apostles to rear.”
*(Voltaire quoted in The Pacific vol. 51, p. 22)

The historian Peter Gar, himself and admirer of Voltaire, described Voltaire’s ‘distaste’ for Christianity as ‘almost an obsession.’ Repeated and passionately, Voltaire returned to the theme: ‘Every sensible man, every honorable man, must hold the Christian sect in horror’”

*(quoted in The Roads to Modernity, Gertrude Himmelfarb, p. 154)

On his deathbed:
“’I am abandoned by God and Man! …Doctor, I will give you half of what I am worth, if you will give me Six month’s Life.’
The Doctor answered,
‘Sir, you cannot live Six weeks.’
Voltaire replied,
‘Then I shall go to Hell, and you will go with me!”

*(quoted in A Collection of One Hundred Pieces of English Literature, BS Nayler, p. 181)


François-Marie Arouet, known by his nom de plume Voltaire, was a French Enlightenment writer, historian, and philosopher famous for his wit, his criticism of Christianity, especially the Roman Catholic Church, as well as his advocacy of freedom of speech, freedom of religion, and separation of church and state.Wikipedia