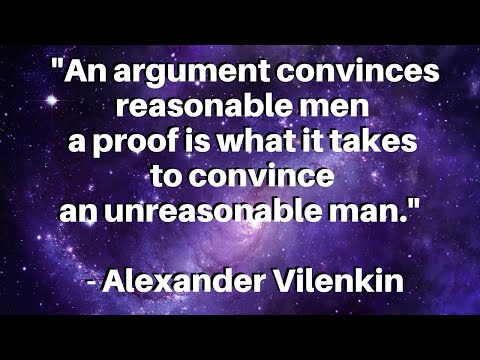 Arguments or Proof? Atheism is Unreasonable


If you can successfully argue that there is a being that created the universe, then you have made the case for God. This puts the Atheist and Agnostic in a tough position where they must defy logic in order to continue holding to a defective worldview (or lack of worldview). Inference to the best explanation is the only way anyone; Christian, Atheist or otherwise can come to knowledge of the truth. Otherwise, one embraces relativism where truth and morality are subjective. No truth. No objective morality.

“It is said that an argument is what convinces reasonable men and a proof is what it takes to convince even an unreasonable man.” – Alexander Vilenkin

(Alexander Vilenkin is Professor of Physics and Director of the Institute of Cosmology at Tufts University. A theoretical physicist who has been working in the field of cosmology for 25 years, Vilenkin has written over 150 papers. Soon after Paul Steinhardt presented the first example of eternal inflation, Vilenkin showed that eternal inflation is generic. Working with Arvin Borde and Alan Guth, In 2003, he showed that a period of inflation has to have a beginning and there has to be a period that precedes it.)
Source: Wikipedia “Alexander Vilenkin”

To make any case against the existence of an immaterial, timeless, personal cause for this existence we all experience together one must commonly defer to the idea of an eternal, self-caused universe. However, an infinite or eternal, self-caused universe is absurd. In fact, the terms “infinity” and “self-caused” are contradictory notions that fail from the start. I have dealt with the problem of imposing infinity on the physical world in the video General Revelation and The Cosmological Argument.

The theory that there is an intimate link between the nature of the universe and our existence is known as the Anthropic principle. We simply follow the evidence where it leads. A common comment coming from the skeptical point of view says that the study of science proves that there is no God. Likewise, it is common today to hear the profession that anyone who is a serious scientist must be an Atheist. It’s very important for Christians and apologists to not allow arguments such as these to go unchallenged. Because the truth seems to be clear that the scientific advances of the last hundred years have done more to reveal God’s existence and nature. We follow the evidence where it leads and through the effort of understanding what scientific discoveries are telling us, we see more evidence for God as time advances.

As the Vilenkin quote summed up very well, one might not be able to prove to the skeptic what is the nature of the Godhead or that God loves you or that God came into the world as the man, Jesus of Nazareth, or His resurrection, for that matter. These are all events that depend upon God’s will and he did not have to do them. What we are dealing with is a metaphysical question that is not sufficiently answered within the limits of physical observations and measurements. However, when we apply all that we DO KNOW from all of science and apply the tenets of reason and logic to the rhetoric due those observations, what we are ALL confronted with is a willful and unfathomably powerful Creator. It might not satisfy the committed materialist or atheist to be confronted with this evidence, however if one objectively seeks knowledge of the truth and is open to all the available evidence you simply cannot deny the arguments for the existence of God without denying what we have observed through science and the logic we have employed to explain it. If you reject metaphysics you handicap yourself in the pursuit of truth.